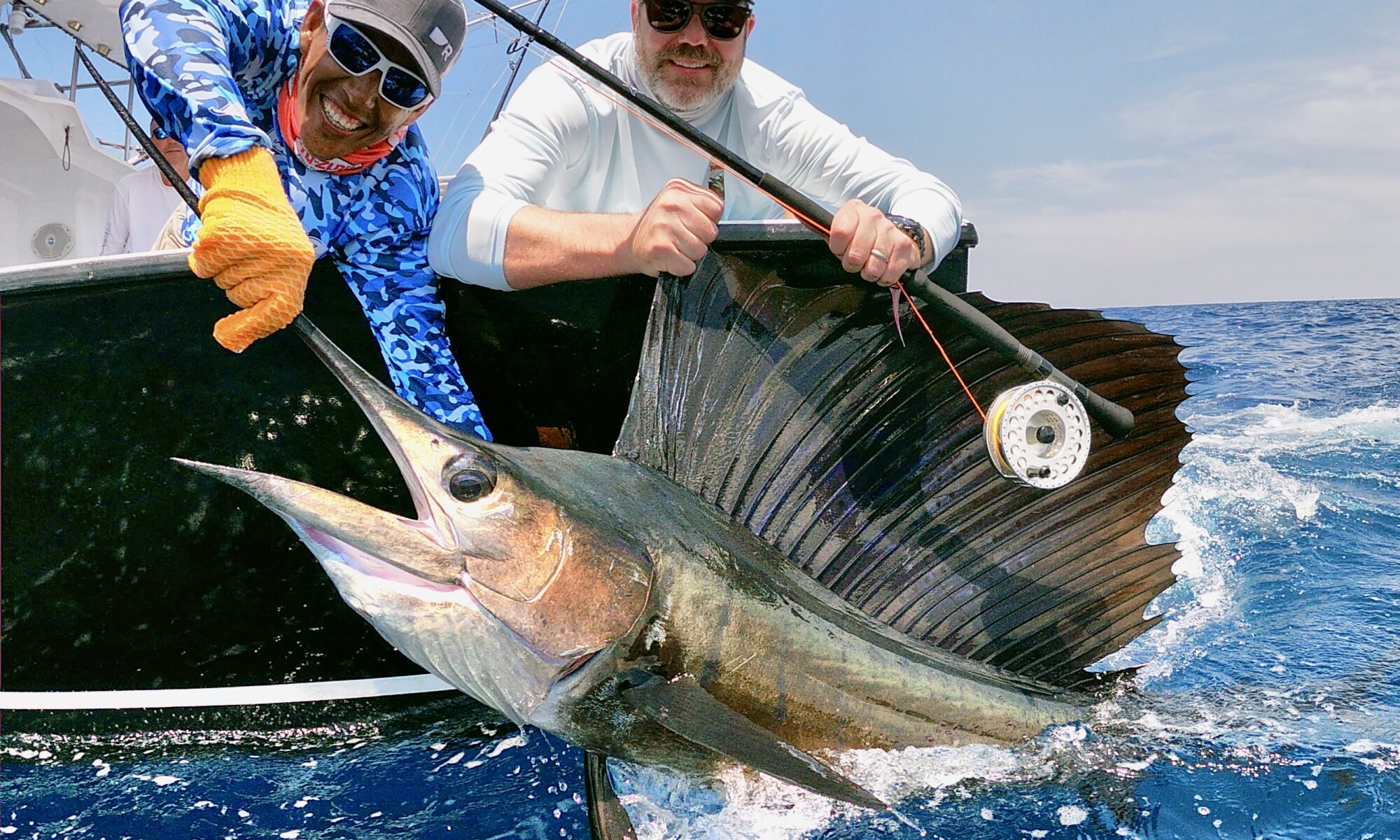 Wow! is how to describe this past month. It was a busy one for sure. Two hosted trips; first with Dr. Guy Harvey and the other with George Gozdz of Unfathomed.
It’s no surprise the bite in April was really good. There were days of amazing numbers – which resulted in 1218 sailfish raised. This gave first time visitors to our region the experience of a hot bite. Also during this month, another big group traveled to Guatemala to fly fish. What better opportunity to catch and release billfish on fly than in our waters!
There were 28 blue marlin raises, which we knew April was going to be a better one than March numbers. And of course the supporting cast of yellowfin tunas and dorados were out in full force.

On April 19th marked Dr. Guy Harvey’s first ever visit to Pacific Fins Resort and for four days the action was caliente!

The renowned artist and conservationist brought his posse of Steve Roden, CEO of the Guy Harvey corporation; Fred Garth, Editor of GH magazine; Brian Rowland of Rowland Publishing; and, of course, his daughter Jessica, who holds numerous fishing world records. The GH crew, along with 13 guests who came from far and wide to hang out and fish with Guy and Jessica.
All the guests were able to fish with Dr. Guy Harvey and Jessica for a unique experience. The 4 boat 3 fishing days expedition manage to raise 144 sailfish, had 119 bites, released 78 sailfish and some dorados and yellowfin tuna action. One of the groups wanted to try out even rooster fish and they released 2 in just 30 minutes. Also had the opportunity for some sailfish on the fly rod.

During the expedition one of the wildest days, the boats circled a massive school of literally thousands of spinner dolphins as they launched high into the air. Why do they do this? Only they know. What we do know is that the anglers hooked up on lots of tuna.

An added bonus for everyone was getting to watch Guy himself paint an original piece of art during the trip. Amazingly, Guy was able to finish the painting just before dinner on the last night. Appropriately, he painted a sailfish surrounded by spinner dolphins, an animal behavior interaction Guy has never painted before. The last step was to auction the art to the highest bidder.

When all was said and done the auction raised $18,000 and Guy generously donated the entire proceeds to the local K12 school near the resort.

As part of this donation during their visit, Billfish Conservation Project members, Guy Harvey Ocean Foundation, Pacific Fins, and Casa Vieja Lodge joined the school for a kind donation of 10 computers as a startup project to help the local education on Marine Science. Dr. Harvey Foundation will donate the course materials to start education that will help 100% on conservation.

While this may have been Guy’s first visit, plans are already in the works for another Guy/Jessica trip next year. If you’re interested in fishing and hanging out with Guy and Jessica, call 850-766-2201 or email [email protected]

To all the GH Expedition participants, form all of us at Pacific Fins, THANK YOU for making it a great trip!