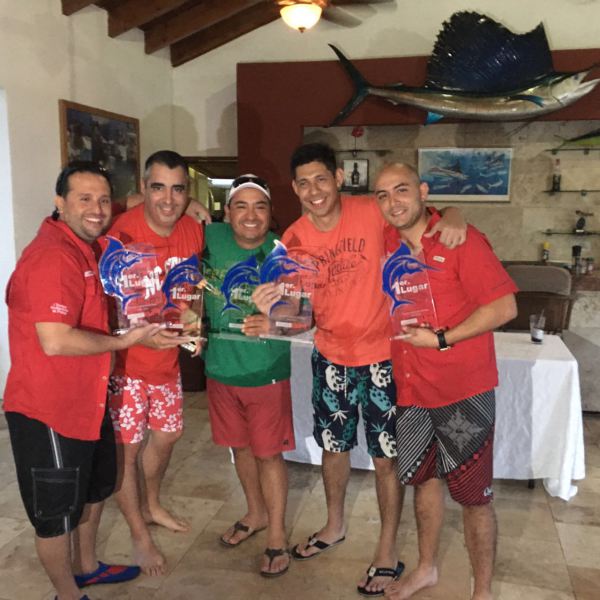 The top brass from Seguros Agromercantil – one of the fastest growing private insurance companies in Guatemala – rewarded their brokers by coordinating a very unique R & R activity event coupled with an Insurance Industry Fishing Tournament.

They selected Pacific Fins as their partner and gave us the privilege to host the group for two nights. For many of the anglers, the tournament resulted in their first ever sailfish release. 3 boats released MARLIN! Dorado were plentiful and everyone enjoyed the freshest sashimi possible. The Summer season provides a lot of variety in Guatemala for eager anglers.

After fishing, the happy group of anglers relaxed by our pool to cap a fantastic corporate event. We congratulate Team Chechos for their 1st place finish! It is the second 1st place finish for Chechos in only a few months. They also won the 1st Annual Guatemala Billfish Invitational.

If you would like to hold a company fishing tournament at Pacific Fins let us know. We can customize it especially for your group. It is a great way to build camaraderie with your team. 1-888-700-3467 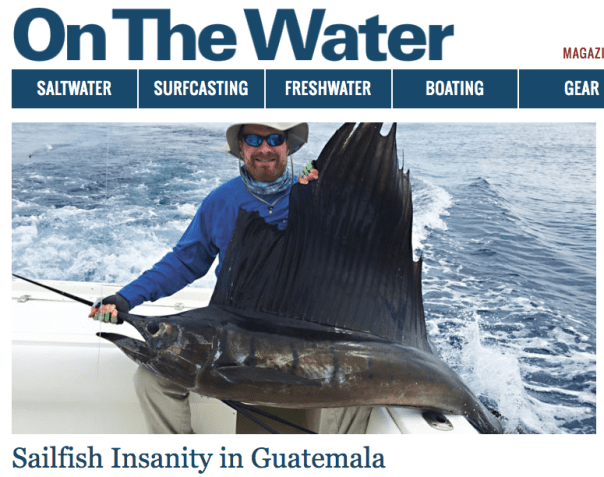 If you want to catch large numbers of large sailfish there is no better place on the planet than the pacific coast of Guatemala. A recent trip to the Pacific Fins Resort in Iztapa, Guatemala gave me the opportunity to experience firsthand why so many place Guatemala at the top of their fishing bucket list. In conducting my pre-trip research I kept coming across fishing reports that contained numbers which seemed impossible, but after catching and releasing 74 sailfish in three days of fishing, I’m a believer!

Read the rest of the story right HERE: http://www.onthewater.com/sailfish-insanity-guatemala/

In addition to our “Performance” and “Luxury” Packages we have an “Economy” Package that has been a big hit with clients over the last 2 seasons.

Two-day fishing packages start as low as $1,875 per person fishing 4 per boat.

We use our beautiful 35′ Strike Boat Aguardiente for Economy Packages. That is the only difference!

You will still receive all the other wonderful amenities Pacific Fins Resort has to offer. We only have ONE boat for these packages per week! We encourage you to start looking at this ASAP if interested.

This is a great cost savings for those anglers wanting to experience our incredible offshore fishery who may not have been able to make it in the past because of price.

Our US Office is happy to help answer any questions to determine if this package is right for you, your family or your buddies! 1-888-700-3467

Connie Turner, Clarence “Lucky” Shawver and Rick Shawver arrived for their first visit to Pacific Fins.  Fishing on Gypsy for 3 days they had 33 raises, 29 bites and 18 releases. They also raised 1 marlin.

Rachel Booker, Mike Flowers and Brian Booker arrived for a 1 day charter. Fishing on Maverick the raised 25, had 18 bites and 8 releases. They also had 1 marlin bite.

We knew it was going to be good, we didn’t know it would be this good!

On Monday, we finished The 1st Annual Guatemala Billfish Invitational held at Pacific Fins and we are still on Cloud 9.  The purpose of the tournament was to raise awareness for the conservation efforts by The Sailfish Commission in Guatemala. In the last 2 years we have made huge strides protecting billfish in our region.

With the tournament being such a huge success we already have dates for 2017!

Anglers are starting to confirm for next year’s tournament already and we suggest looking into this soon. DEMAND WILL BE HIGH. Call us at 888-700-3467 or email us.

In addition to the celebrities and clients who joined us, the local media was present, our tourism board – INGUAT, the head of The United Nations in Guatemala attended, along with the Vice Minister of Fisheries and other Government officials!

The kind words from everyone were humbling:

“Some trips stick with you, this one will.” – Captain Wild Bill Wichrowski, Deadliest Catch, Discovery Channel

“Thank you so much for the opportunity to come down and support such a wonderful cause. I am honored to be able to work with you to make a difference in such a special place.” – Rob Kramer, President, IGFA

“Rocked the tournament to 1st place, great job by all involved, looking forward to the 2nd annual! – Doug Shenk, Client

“So great to be a part of this movement.” – Peter Miller, Host, NBC Sports “Bass2Billfish”

“Thank you for the trip of a lifetime!” – Capt Scott Walker, TV Show, “Into The Blue”

“I had a wonderful experience of food, fellowship and fishing!” – Dr. Chris Stearns, Client

“What an epic trip at Pacific Fins. It gets better and better each time.” – Ozzy Delgado, Guy Harvey Magazine

“A unique experience. To see the local fishery and also to understand the conservation efforts that are going on here. We expect to see a lot of sailfish here for years to come.” – Mat Jackson, Grundens, Sponsor

“This is my 3rd trip to Pacific Fins. This place has truly touched my heart.” – Terry French, Extreme Chef, Food Network

“The 1st Annual Billfish Invitational at Pacific Fins was fabulous. The best of everything, the host Niels, fishing, food and hands on service by the captains and staff. But the most important part of it all was that it benefits the Guatemalan Sailfish. We have already signed up for next year.” – Stacey & Johnny Mack Powers, Clients.”

The Hinman group fished 1 day on Chechos raising 19, with 16 bites and releasing 12 sails.

The Erichsen group also fished a day on Chechos raising 10 sails, with 7 bites and released 5.

Lewis and Mariann Scherer arrived for their first visit and fished on Gypsy for 3 days. They had 81 raises, 69 bites and 42 releases. Plus 1 marlin!

Dr. Bo Whitehead, his wife Brandi Whitehead and Dr. John Boon arrived again for the 3rd year for a day charter fishing with their group of doctors and nurses – Esteban Arredondo, Linnea Bowman, Sara Halfmann, Sylvia Diaz, Don Griffith, David Boswell and Candice Daniels after finishing their mission work. They fished on Chechos and Sirena and raised 39, had 28 bites and released 5 sails. They released 1 marlin too!

Mission workers Mike Humphrey, Lauren Lepper, Stephanie Frey and Kunal Patel spent a day relaxing and fishing a half day on Maverick. They raised 8, had 6 bites and released 4 sailfish.

Stacey and Johnny Mack Powers returned once again fishing on Chechos for 3 days. They raised 50, had 43 bites and released 35 sailfish.