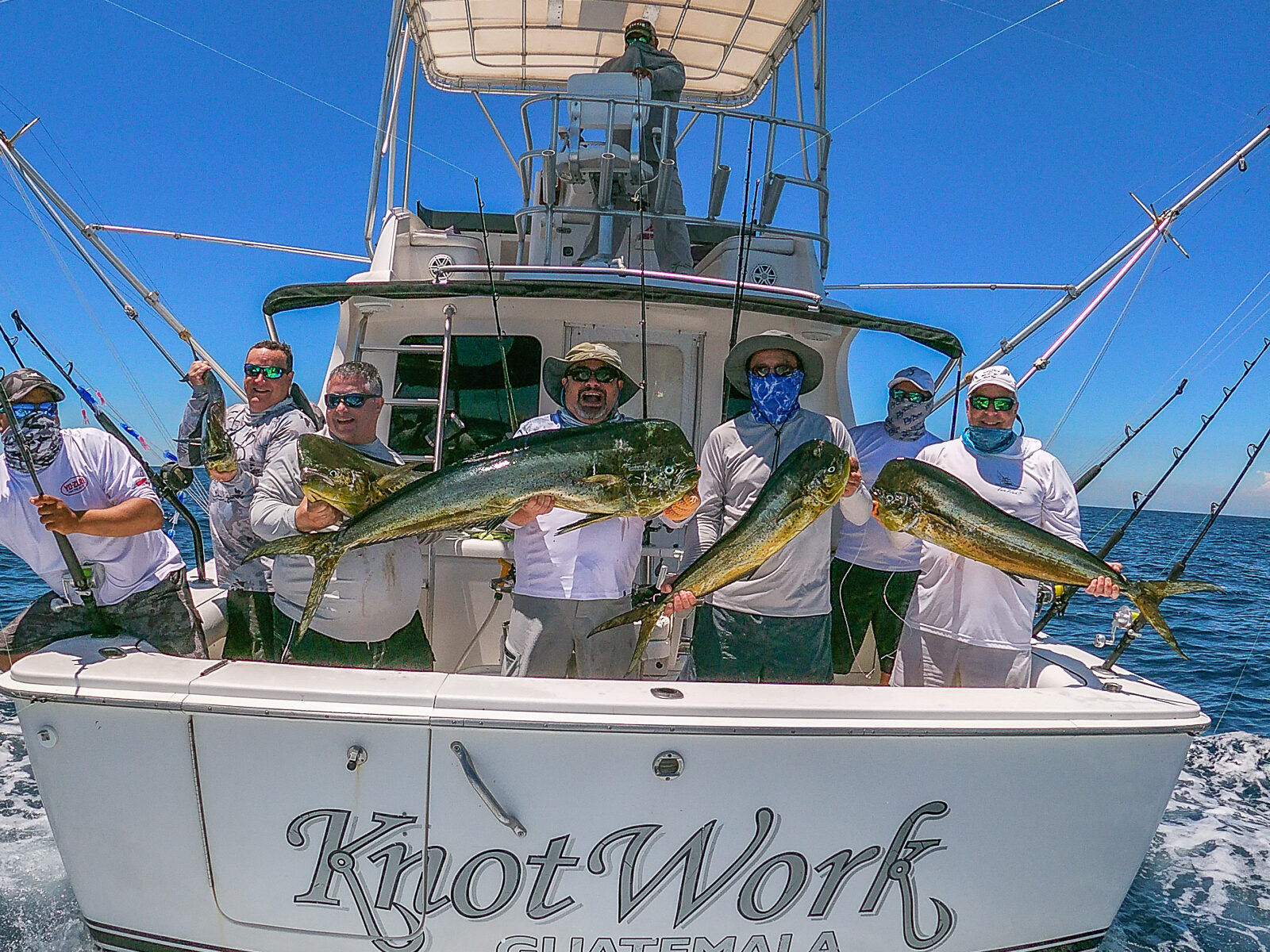 “Hello Ozzy,
The experience at Pacific Fin’s was beyond my expectations. You really have something amazing there. The fishing , your staff and the crew on Knot Work were the best. An unforgettable trip. The fishing was amazing, 70 sails day one, WOW”. – Thanks for an amazing trip, Harry Aguero.

A highly anticipated trip, which began planning in March 2019, five Cuban-Americans set a fishing trip for August 2019. Unfortunately, that trip was postponed last minute due to a hurricane heading towards Miami and then again in April 2020 due to Covid travel restrictions.

Talk about bad luck… but as they say… third time is the charm and it was worth the wait!
We have to THANK Ralph, Harry, Robert, Joel, and Mandy for doing a very nice thing for Pacific Fins. They got together and created a website about their trip to Guatemala. Check out their website which highlights all of their experience from day one – plus… they have some great videos. 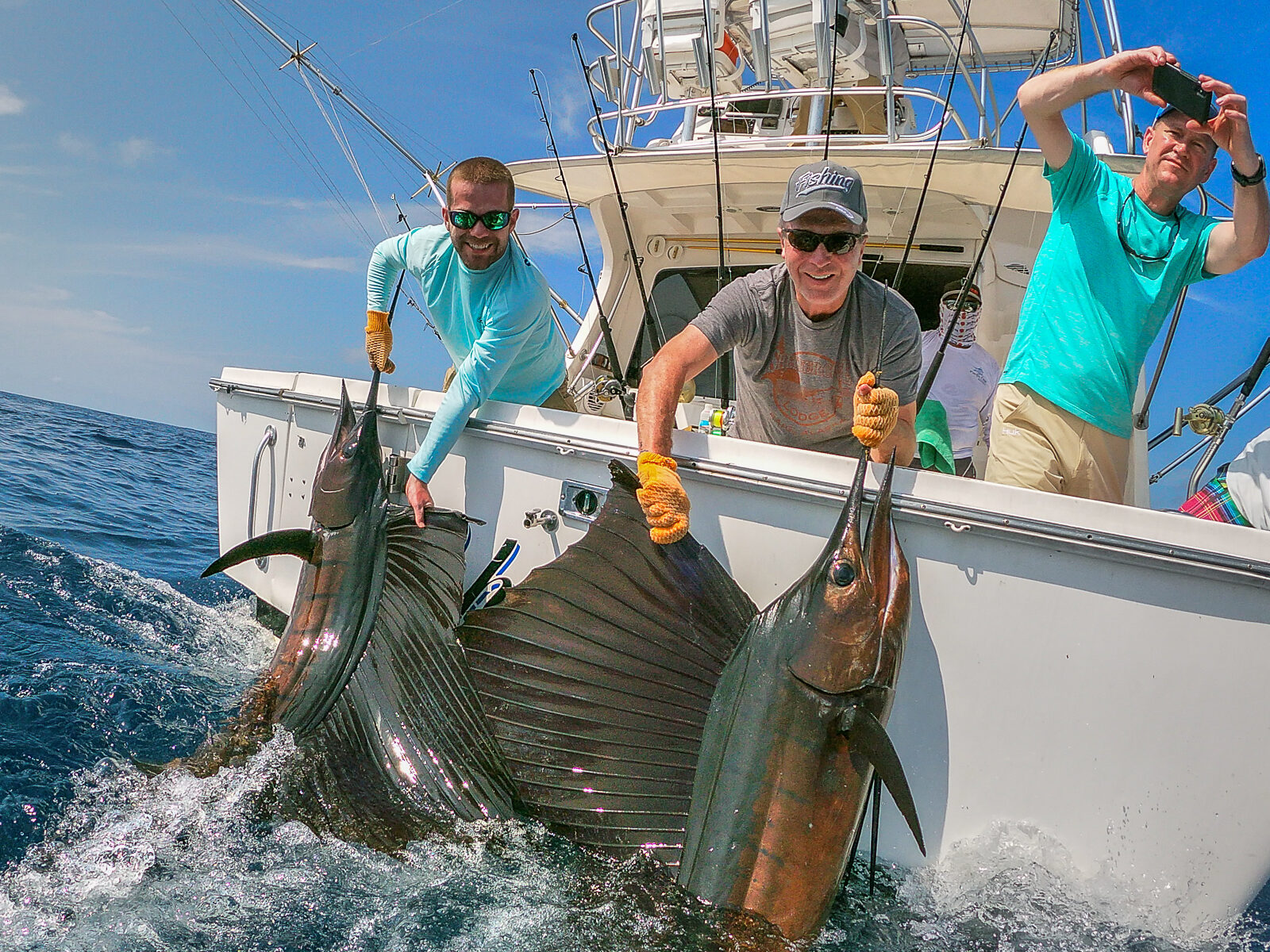 You can’t say “Spring Break” without thinking of a fishing trip. We are aware you are tired of the cold and miserable Winter. So, now it’s time to start planning a fishing trip to Pacific Fins, where you will get thawed out.
Our peak season is October through May, but… now comes the time of year many love. I call it “The Smorgasbord Season”. This is when not only you get intense sailfish action, its when blue marlin start to be more abundant. Yellowfin tuna will be active around spinner dolphin, and dorado will be in the larger class. Plus, you can’t never rule out a striped marlin in the spread and wahoo.
March through May is a great time to be here. It’s also the time that books fast. We have limited space available, want to be part of an epic season? Grab your passports, call your fishing partners, pack your bags, and head to Guatemala!

Uncharacteristic for this region, due to a mix of strong cold fronts and green water making it’s way into the fishing grounds, it has been a slow February. As you can see the fishing reports, there has been better days than others.
The good news, blue water started to make its way into the grounds which has resulted in better action. The blue marlin bite has picked up and reports of yellowfin tuna has sushi lovers very happy!

SOLD OUT! We knew this was going to happen. The first Unfathomed hosted trip with Captain George Gozdz booked in record time.
﻿This is an all-inclusive adventure with 4 nights/5 days accommodations and 3 full days of offshore fishing on May 13th – May 17th, 2021. In addition to the fishing we have added an afternoon of sightseeing in the old capital city of Antigua on the day we arrive.
Due to limited space and demand, we will be adding a second Unfathomed hosted trip soon. Stay tune to social media and our weekly news letters for the next date. You don’t want to miss out on one heck of a time. 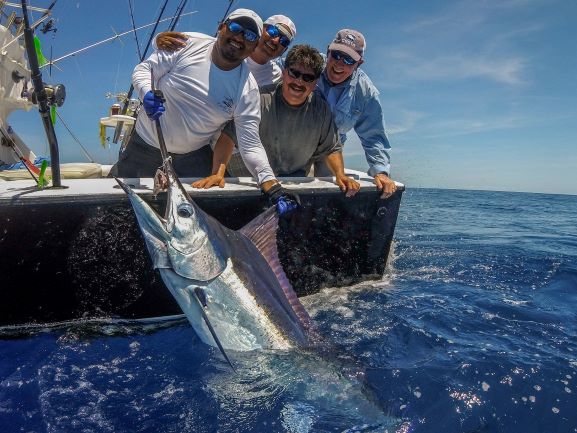 The month of October, which is the start of our peak season, was just epic for all species; Blue Marlin, Sailfish, Stripe Marlin, Yellowfin tuna, Dorado and Roosterfish.

The hot Dorado bite we saw all Summer doesn’t seem to slow down. They just got bigger in size!

The Sailfish has been consistent through this period and the numbers of raises are ranging anywhere from 18 to 35 – and sometimes more. Doubles and triples are starting to be common.

Offshore, if you run into the Yellowfin tuna, the bite has been productive. Our average size tunas are in the 40-60-pound range. But, recently we got to witness a 184lb beast hit the dock.

The man in the blue suit, the blue marlin has reign supreme this month. Watching a blue marlin come into the spread and crash the party is a site like no other. Everyone’s heart rate goes into overdrive witnessing how it can swallow a 5-pound bonito like nothing. If that doesn’t get your attention, once hooked, you will see a spectacular jumping ability and power it possesses. All our groups have been raising anywhere from 2-3 fish per trip.

The Blue Marlin, something about them that will make everyone SMILE

Mixed in with the Sailfish, our clients have had their share of releasing striped marlin, which have produced Billfish Grandslams – a bucket list accomplishment many anglers want to achieve.

Rooster fishing… has been nothing short of amazing. When the waters near shore are clear, look out… these aggressive feeders are not just beautiful, they also pack a good fight.

Johnny Mac with 2 of 33 Roosters released during his 30th trip to Pacific Fins. I’d say that’s one heck of a day!

If October was a sign of things to come, we suggest booking early. You don’t want to miss what this season has in stored.